IN MEMORY OF Screening In Southwestern Illinois

Southwestern Illinois Creative Arts Syndicate presents a screening of Eric Stanze’s critically-acclaimed film, IN MEMORY OF on Thursday, September 26, 2019. The event starts at 7:30 pm and includes a Q&A with director Stanze. The screening and Q&A will be at the Schmidt Art Center:2500 Carlyle Ave, Belleville, Illinois 62221(Liberal Arts Theater, Rm 1370) Admission […]

HorrorNews.net Reviews IN MEMORY OF

A new review of IN MEMORY OF has crept forth from HorrorNews.net! “The film really hits the mark as a dynamic new accomplishment for Eric Stanze and team. Weirdly powerful and full of visual pizzazz, IN MEMORY OF is one to see for thrill-seekers looking for something different!” – Adrian Halen, HorrorNews.net   Click here […]

(re)Search My Trash Interviews IN MEMORY OF Director Eric Stanze 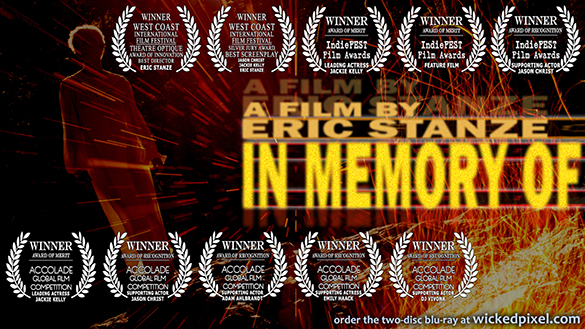 Austria’s (re)Search My Trash, “The premier site for other films,” interviews Eric Stanze about the making of his latest film, IN MEMORY OF. Read the interview here!