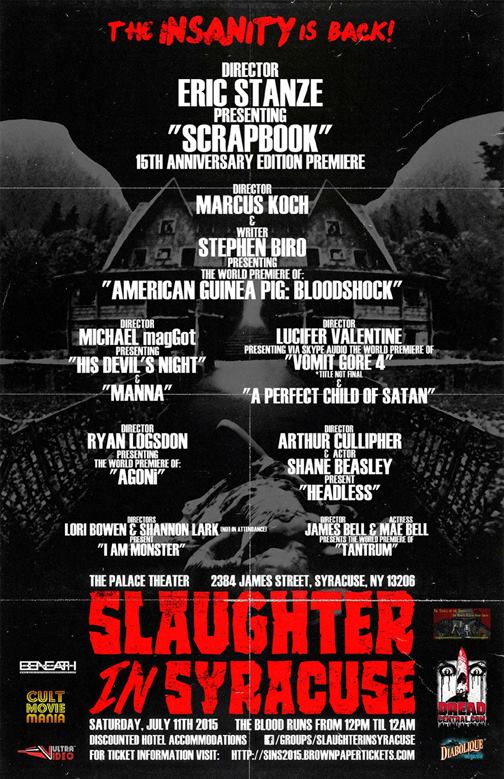 The slaughter begins Friday, July 10th at 6:00pm at The Maplewood Inn with a special VIP Meet & Greet experience with the directors and actors in attendance.  The evening includes exclusive screenings of AMERICAN GUINEA PIG: BOUQUET OF BLOOD & GUTS (with director Stephen Biro in attendance, joined by special effects maestro Marcus Koch) and REVENGE IS HER MIDDLE NAME (with director Anthony Matthews in attendance).

Saturday, July 11th brings Slaughter In Syracuse to The Palace Theater, where director Eric Stanze will headline the film festival, screening his classic film of brutality and survival, SCRAPBOOK.  Stanze will be in attendance, participating in a Q ‘n’ A panel following the screening.

The other films screening July 11th include:

Sunday, July 12th, the excitement continues at the Maplewood Inn with the Slaughter In Syracuse Collector Con, starting at 11:00am, featuring vendor booths with everything Horror and Sci-Fi related.

Get all the details here!